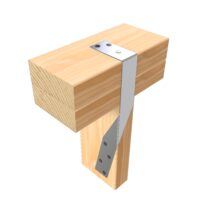 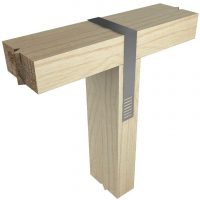 Greater tie-down strength: Stud Tie nails are driven into the side grain of the stud to resist wind uplift in lateral shear. This is far stronger than relying on the withdrawal strength of common nails in end grain.

No splitting of the timber: With Stud Ties, the careful location of the nails away from timber ends and edges avoids splitting which can occur in common nails only joints, especially in some timbers and particularly with skew nailing. This is not only unsightly, but it reduces the strength of the joint substantially.

Convenience: As ST3, ST4 and MPSST Stud Ties have in-built nails, there is no need for other nails. Stud Ties are quick and easy to apply; the in-built nails are readily driven home with a conventional hammer. ST4U70 and ST4U90 Stud Ties have two bends for easy installation on 70mm and 90mm wall frames respectively.

Single sided Stud Ties (STS3) are specially designed for factory production. They avoid the need to reach under the frame on the framing table.

The Ezi Stud Tie (MPSST) is also designed for both factory and site installation. But the MPSST has the added advantage of a greater tie-down capacity.

Complies with AS1684 Bracing Units rules: All types of Stud Ties meet the tie-down requirements of the code when installed as specified.

For application and design capacity information, refer to the Pryda Connectors & Tie Down Connectors Guide.